Yesterday I spoke to a younger Marine officer. He was a first lieutenant and a student naval aviator (flight student) who was clearly flustered with his performance on recent flights. I was trying give him a little morale boost while telling him to watch his bearing, as looking flustered and stressed does not inspire confidence in your peers, superiors, or subordinates.

He then confessed to me why he joined the Marines: To become a pilot. I told him not to say that ever again. I cannot answer to the purity of his motivations, save for the fact that in the Marines, and especially in the officer corps, it is “not about you.” The second you start thinking that it is about you is the second you start to fail in your obligations to the Constitution, to the mission, and to your Marines.

His self-motivation is somewhat dangerous: There are countless avenues by which on can become a pilot, and becoming a Marine to become a pilot is perhaps one of the toughest routes to wings that one can undertake. Yet he’s willing to go that distance for himself, and himself alone. This speaks to incredible selfishness. He needs to be watched.

Hopefully, when the pressure is on, at night, with dogshit visibility, and assholes shooting, and he’s flying a casualty evacuation mission, he will have the fortitude to deny his selfishness and continue the mission, even though it might cost him his life. The Marine Corps, after all, is not always great for self preservation, but we will look after each other. 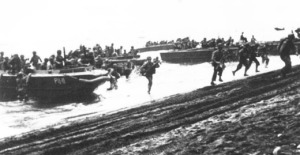 Marines of the First Marine Division storm the beaches of Guadalcanal on 7 August 1942. The Battle of Guadalcanal was the end of the beginning of the American portion of the World War II in the Pacific.

I have written on the nature of Professionalism.  An element to true Professionalism is the maintenance of a course of independent, continual study.  Here I will speak to my personal reading program, which is a core part of my Professional military education.

END_OF_DOCUMENT_TOKEN_TO_BE_REPLACED 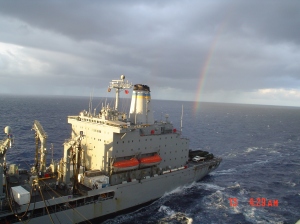 In late 2005, a USNS Fast Combat Support Ship provides fuel to the USS Nassau (not visible) while transiting the North Atlantic.  Elements of the 22d Marine Expeditionary Unit are embarked on the Nassau.  A rainbow can be seen in the distance.  The 22d MEU was traveling to the CENTCOM Area of Responsibility to conduct combat operations in support of Operation Iraqi Freedom.

It might be instructive to see who we think is worthy of making our collective list. List in hand, we might be able to deduce a few defining qualities that make for superior generalship, and whether the victor in battle is also the scholar.

Granted, no list can ever be exhaustive, but such lists can be instructive, and fun (I like thinking about these things, anyways).

First, a couple of gudelines:

1) No fictional generals. (I’m a huge fan of Sam Damon and Ender Wiggins, but lets keep it real)

2) Other ranks are fair game: Go ahead and mention the Air Vice Marshalls, Crown Princes, and Dukes of Earl.

The Nature of the War

Some dead German once wrote that the key to a successful campaign is to understand the nature of the war you are fighting.

It seems to me that the British and Americans both prove this.

It seems to me that HS’s contention is that large kinetic operations are generally required as a precursor to a successful counterinsurgency campaign. I’m not convinced of this (in all cases). I think that kinetics are required in cases where the population is violently resisting the government’s legitimate authority. And even then, kinetics aren’t always required everywhere in a region that is resisting authority. (I was stationed in Hit, Anbar, IZ. Hit, to my knowledge, never really had a large kinetic aspect. However, kinetic operations did take place in other parts of Anbar.)

It seems that kinetics are required not to destroy the enemy, but to demonstrate that the state is willing to exercise its monopoly of force. Since the object of kinetics isn’t to kill, but to demonstrate (create a psychological/social effect), such kinetic campaigns aren’t required everywhere in that is under insurrection. They are only required in areas where a principal group is undertaking violent insurgency. In Anbar the principal group would be certain Sunni tribes. A demonstration of violence was thus required against those groups, which is what Fallujah II and Operation Steel Curtain were all about. This is known as escalation.

If If the insurgency is not violent, security patrols combined with provision of government services and co-option of local leaders is key. This is known as de-escalation.

Now, on to Basra, and the meat of HS’s post.

It seems to me that the British completely misunderstood the nature of the fight they were in. They de-escalated when they should have escalated. When they retreated to their compounds, they showed they do not have the will to enforce the government’s position. They should have become very kinetic at that point.

Also, recall the Marines, in the wake of OIF I–the invasion, were assigned an occupation sector that corresponded with the more recent British area of responsibility. The Marines were highly de-escalatory in the wake of the hyper-kinetic invasion.

It ultimately comes down to knowing the nature of the fight you’re in. Are you fighting in a situation that requires violent escalation or not? If you’re wrong in either case, the result is the same: The loss of legitimacy. If you’re right, you can at least get some breathing space to start enforcing the government position.

To My Fellow Marines: Happy Birthday!

(Smitten Eagle’s Note: I offer this post a bit early, as the actual birthday is 10 November. However, my unit celebrated the birthday of my Corps on 3 November, and many units celebrate this hallowed and special time on days they are able and according to their circumstances.)

It’s been another year of history for my beloved Corps.

Through this year the Marine Corps has fought through deployment, training, and combat. It has been a year of marked success against the enemies in the Long War. Yet these engagements are merely the first steps in the marathon of this war. This war will tax our reserves of strength and endurance, and therefore we must allow ourselves a rest, once a year, as our situation will allow, to reflect, rededicate, and recommit.

Our Birthday is a time to relax with our camerades, to reflect on the depth of our commitments, and to rededicate ourselves to the Constitution and to eachother.

Our Birthday is a time of great cheer. But it is also a time embittered with sadness as we remember of the sacrifices of those Marines who have died on the battlefields.

Our Birthday is a time to recommit to our families, be they spouses and children, or members of the same fire time. For on with their strength do we get the resolve to take another 30-inch step to the sound of the guns.

Our Birthday is a time to strengthen ourselves for the fights in the future, because this war will continue. No doubt, there will be Marines in contact with the enemy on night of 10 November, 2008, 2018, and possibly even in 2028. Victory is not located on the other side of the next hill, but many hills away.

May God bless you all!